On the show today, Karen twitters with geocahcers while we record..
Listen as we follow the adventures of a geocacher trapped on a government complex.
Flickr Photo set – including type of picture of geocaching hero that we are looking for to
incorporate into our Scout Show Booth
Spring cache maintenanceNeeds Maintenance Attribute and Pocket Queries
Cache Placement SafetyGeotech Podcast – NEW  – Check it outHas Atlantis been discovered?Updates to the Geocaching and Waymarking websitesLetterbox – Friend of EragonLetterbox travelers/hitchhikers
EventsGeocaching Colorado Geo Chat 2009WWFM V – Colorado Springs – Kooky Cachers
Help us promote Centennial State Geocaching by the following:Podcast Alley VotingReview in Itunes
Blogs of Mrs. Beasley OmnimediaCentennial State GeocachingMovies Worth Your TimeColorado CentsColorado Rainbow Arts
TwitterArtKaren

Groundspeak.com published updates to the geocaching.com and waymarking.com websites on February 11,2008

You can read about the geocaching.com updates here

You can read about the waymarking.com updates here

We will have this as a show topic on the next podcast.

On April 25th 2009, the Denver Area Council of the Boy Scouts of America will hold their annual Scout Show. Cub Scout Packs, Boy Scout Troops and Venturing Crews, get together and show off what they do best.

This years theme is “A Hero’s Adventure”. Our Venture Crew has come up with the idea of featuring photographs in a mosaic of Heroes who also geocache.

If you know a geocacher who is also a hero (Military, Law Enforcement, Emergency Services, and Teachers), we would like to feature their photograph. You may submit a photograph in jpeg format, along with their geocaching name to the show e-mail . We will feature photographs of the mosaic in the show Flickr set. We are also planning to record a episode of the podcast at the Scout Show. If you plan on attending, be sure to stop by and say hello. 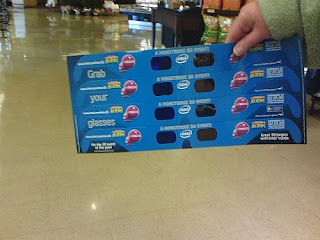 Last night, the latest gimmick from NBC was unveiled on a unsuspecting public. A episode of the show “Chuck” was aired in ‘glorious 3-D’. This show is on my TV viewing rotation, so I would have watched it anyway.
Chuck (Zachary Levi) is a show of a computer tech worker at a ‘big box’ electronic store, who by a comic set of circumstances, ends up with the entire NSA database stored in his head. he is protected by two NSA agents (Adam Baldwin, Yvonne Strahovski). There is also a weekly subplot revolving around Chuck’s co-workers at the big box store.
What didn’t work: The 3-d effects. It appears that the technology has not changed much since the technology debuted in the 1950’s. It appears that using the glasses , along with the red/blue hue in the program, forced the viewing experience to be fuzzy. The 3-d effect came out when my eyes attempted to focus on images. Sometimes it worked, sometimes it didn’t. I attribute this to two possible factors. First, I wear eyeglasses with a glare reflective coating. Second, our main television is a RCA 26 inch TV purchased in 1985. I’m not sure if the viewing experience was better on a larger screen. I would be interested to receive feedback on this.
Missed opportunity to cross promote with Facebook. Chuck references a Facebook group in this episode. When I accessed my Facebook account, I could not find the group. TV show have not figured how to cross promote with Social Networking sites.
This show should also partner with Best Buy, they could offer the ‘Chuck product of the week”.
What did work: Story, story, story. The ability to mix the weekly main spy story with the sub-story in the big box store. The ability to keep me laughing for the hour. This is what Hollywood forgets, it always comes back to the story. What do you think?