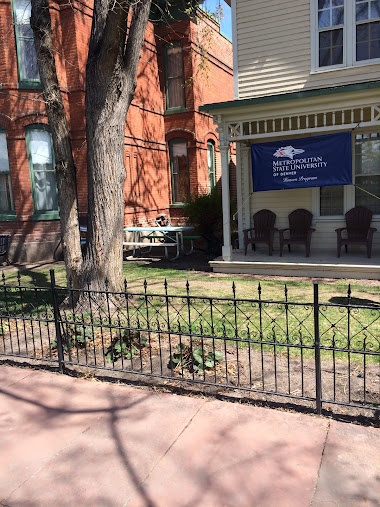 TEAM_CSG’s quest to fill in month/day combinations where we have never found a geocache.

Geocaching is an outdoor recreational activity, in which the participants use a Global Positioning System (GPS)receiver or mobile device and other navigational techniques to hide and seek containers, called “geocaches” or “caches”, anywhere in the world. (Source: Wikipedia)

The Honors House Rocks – today’s journey brought me to the campus of Metro State University and the area known as Ninth Street Historic Park.  A collection of buildings dating back to beginnings of Denver and Colorado, and preserved as part of the campus community. After a few additional DNF logs, I discovered the cache owner has to replace the cache, as it was absconded by a squirrel.  I made another attempt over the lunch hour, but ended up being embarrassed as I discovered that the cache was hidden in a spot that I failed to look at previously.  The hint in the cache actually referenced more then one possible area.  If you visit this cache, you will know what I mean.  I was able to pick up another trackable here, one with a mission to visit all 31 NFL stadiums.  I will see about getting a picture at Mile High.